3 Reasons to Root for Mac the Moose

It seems like only last week that Moose Jaw’s iconic Mac the Moose was the tallest moose statue in the world.

In truth, it hasn’t held that title for four years. Back in 2015, a Norwegian municipality put up “Storelgen,” a shiny statue that measures – get this – 30 cm taller than the suddenly undersized Mac.

Saskatchewan was content to live in blissful harmony with Storelgen until Facebook duo Justin and Greg challenged the city of Moose Jaw to outdo Norway at its sculptural game.

Moose Jaw mayor Frasier Tolmie rose to the challenge immediately, claiming in a video that this insult to Mac would not stand. Norway, in turn, responded with a defiant video of its own.

In the words of a CTV reporter, Moose Jaw and Norway had entered an “international moose beef,” with stories  in the New York Times and The Guardian fanning the moose beef flames.

While we respect Norway’s decision to build giant gleaming animals along their highways, here are three reasons we’re rooting for Mac in this moose-on-moose battle.

There’s no disputing the fact that Storelgen, with his reflective surface, is beautiful and maybe – we’ll concede this much – even a little majestic when compared to Mac’s painted exterior. But you’re not going to find a mirrored moose in nature. In fact, Storelgen almost looks like a T-1000 Terminator robot sent back from the future to murder all moosekind. Just a thought.

2. Mac the Moose has celebrity clout

It is not known if Storelgen hangs out with cool Norwegians, but Mac commands a serious celebrity entourage. Mac has had his picture taken with filmmaker Kevin Smith, athlete Andre de Grasse and CBC anchor David Common – not to mention the thousands of people who have stopped for selfies with Moose Jaw’s coolest moose. 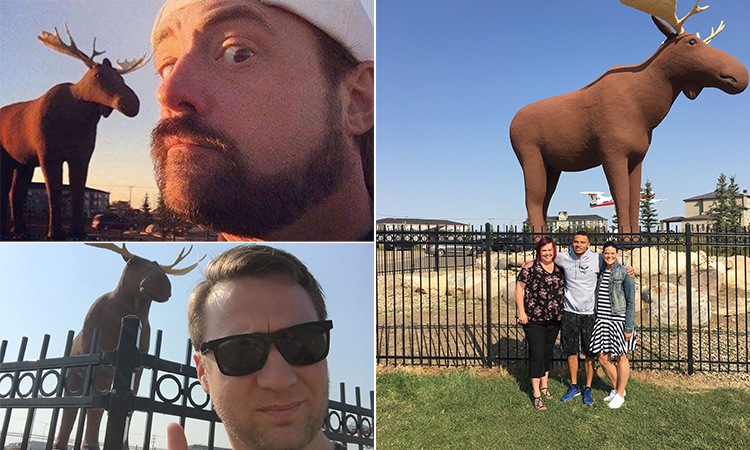 3. Norway seems unclear on what a moose is

“Storelgen” translates to “The Big Elk,” which makes you wonder if Norway is the big moose authority it claims to be. It’s possible the European elk is the same species as the North American moose, but until we know that a society of intelligent elk from the future didn’t send a giant chrome robot back in time to defeat Mac the Moose and kickstart the Great Elk Empire, we’re going to back Mac in this challenge.

4 Beautiful Winter Hiking Ideas in Southern Saskatchewan
Winter in the City
Plan your extended stay or trip back to Saskatchewan
Driving for Dessert: The Gallery Café in Moose Jaw
Road Trip Southwest Saskatchewan