“Would you steal something?” Marea Olafson’s infectious smile and twinkling eyes patiently await my answer. I stand in her highway pottery store, built from reclaimed wood, astounded by her trust in people. Here, 6.5 km east of Dafoe, near Wynyard, Saskatchewan, Freba Pottery runs completely on the honour system. Open 24 hours a day, 365 days a year, my astonishment at not a single theft leaves me open-mouthed. 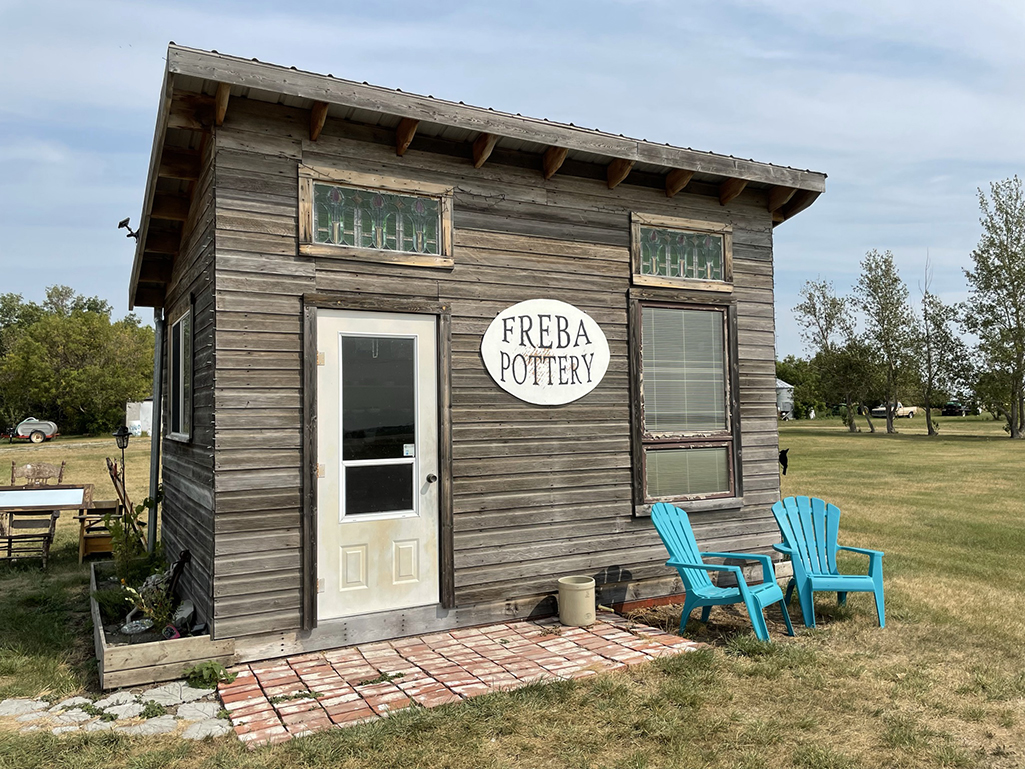 “If we have the expectation that people are good, they will be good.” Marea’s philosophy seems idealistic to this big city girl. Yet in eight years not a single piece of her beautifully hand-crafted pottery has been stolen.

“If someone desperately needs a piece of pottery then that is how it is.” Not that there is a lack of desperate shoppers. Marea tells me of the relief of a Christmas Eve visitor on a snowy night requiring a last-minute gift. It’s handy to have an ‘OPEN’ sign to a shop on the edge of the Yellowhead Highway that is ever present. 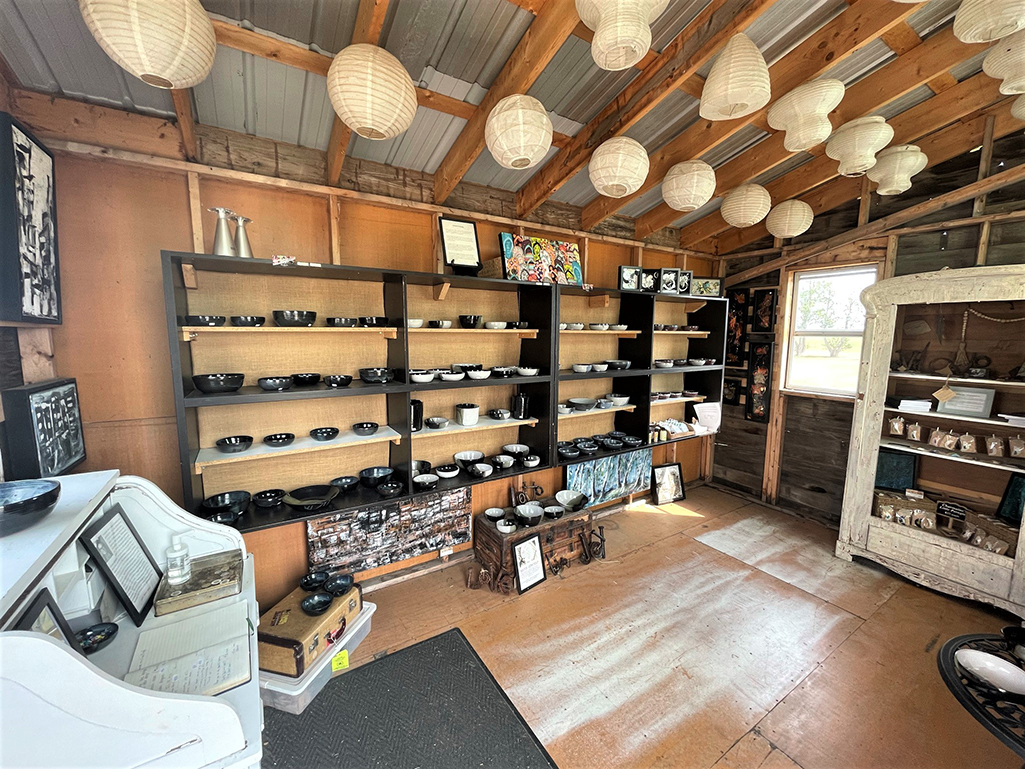 Inspired by a visit to a similar honour system studio in British Columbia in 2003, Marea returned home with an incredible feeling of trust in humanity. Her love of pottery and the purchase of her grandmother’s 1919 Heritage Farmhouse culminated in the birth of Freba Pottery.

Today the shop, named for her two daughters, contains not only Marea’s lovingly made pieces, but the work of other Saskatchewan artisans. Payment can me made by cash, cheque or etransfer.  All Marea asks is that you leave a note detailing what you have purchased. 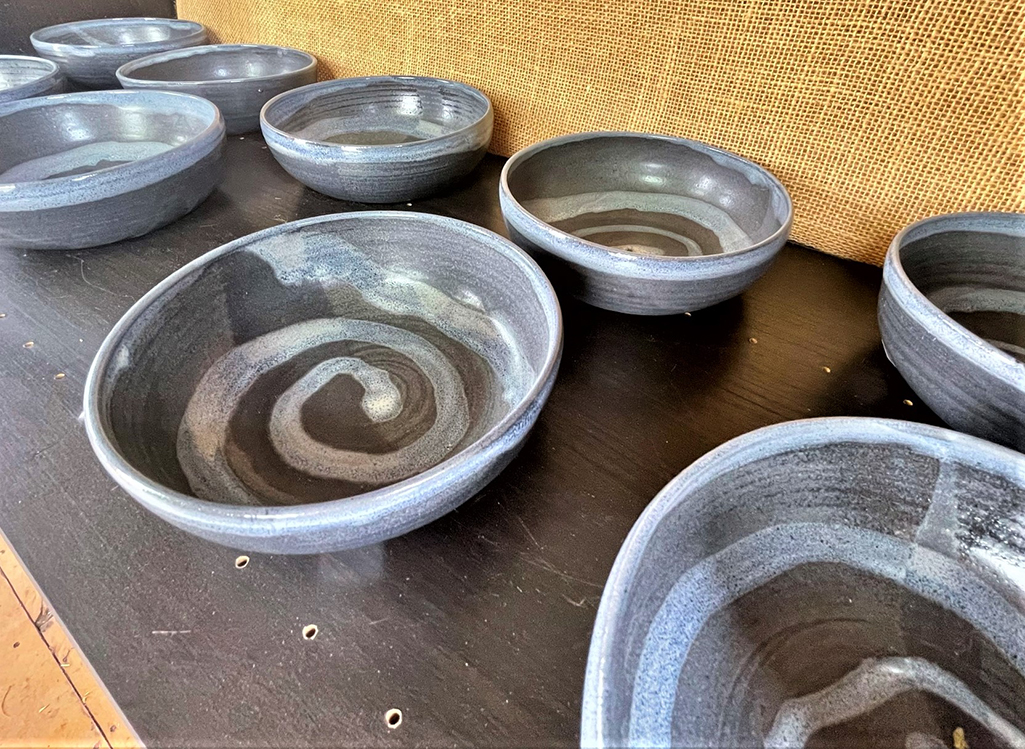 As a child growing up in Saskatchewan, my only memories of art were those created by the vibrant yellow canola fields shimmering against blue skies and red barns. Today the arts are flourishing in the east central area of the province – a treasure hunt for any Saskatchewan road tripper.

The dusty gravel road off Highway #5 at Muenster, Saskatchewan gives no clues as to what treasure awaits beyond the half kilometre bend. Then, as if transported to the European countryside, the pristine white exterior St. Peter’s Cathedral comes into view. With two towers rising 70 feet skyward, the air fills with awed silence, save for birdsong from nearby forests. 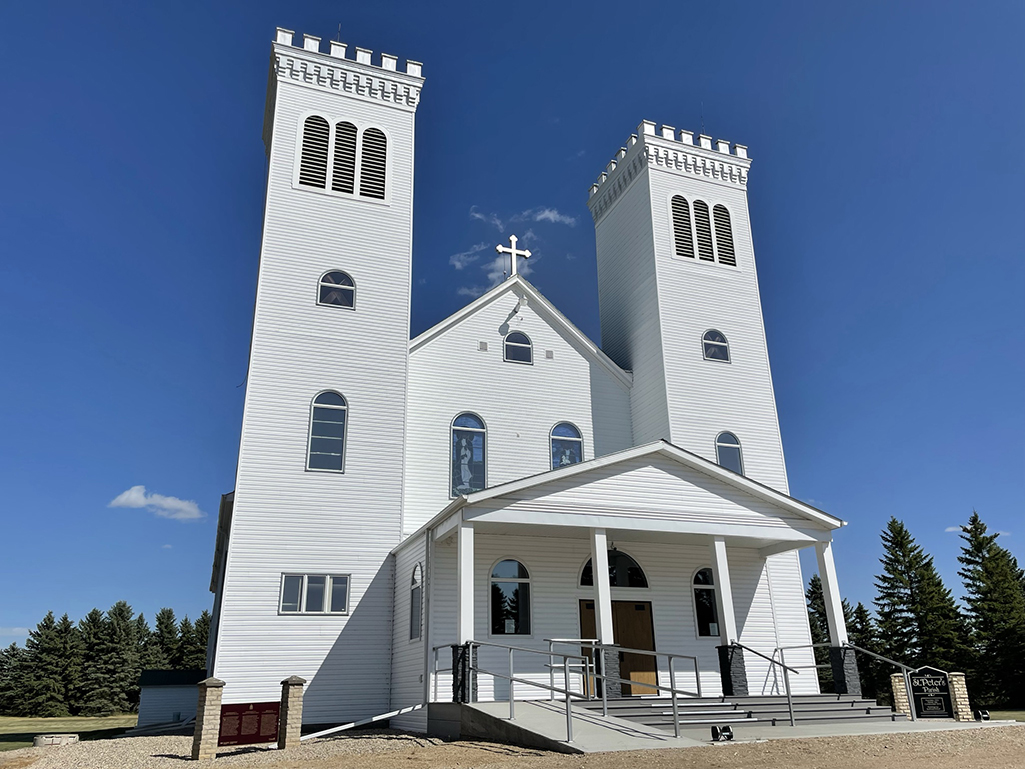 The Benedictine monks of the Order of St. Benedict (OSB) were some of the early settlers of this area. Serving as German speaking priests for settlers, who primarily were second generation German Catholics from Minnesota, they would be key in founding both the parish and St. Peter’s Cathedral.

As surprising as the imposing structure is in this rural hideaway, it is the within that the art treasures are found. As doors open into a recently renovated vestibule, one is reminded of Michelangelo and his Sistine Chapel artwork. 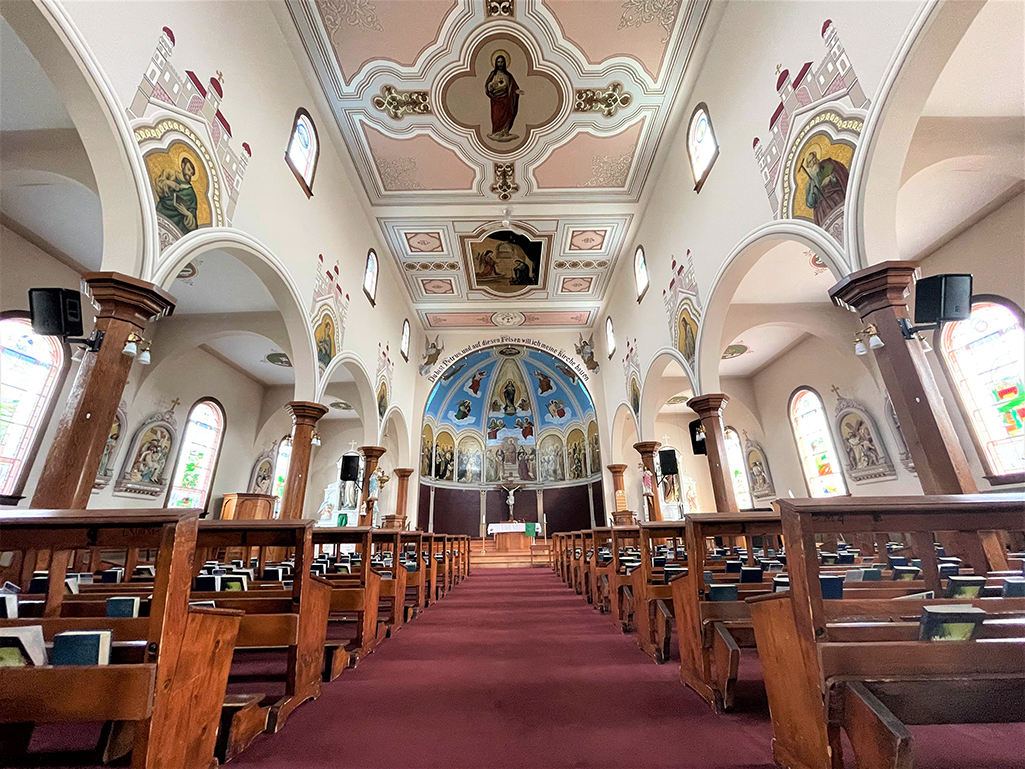 In 1919, German born artist Count Berthold Imhoff, a friend of Abbott Bruno Doerfler (OSB) who headed the parish at the time, painted the cathedral with 80 life sized frescoes and figures. The ceiling, the apse, the walls and archways are adorned with art depicting scenes from the Gospels and persons of faith. Imhoff charged the parish just enough to cover the cost of materials, a total of $3000.00. Some of the Benedictines are depicted in the faces of the saints. St. Paul (on the southeast pillar) is a portrait of Abbot Bruno, who sadly did not live to see the full completion of the project. 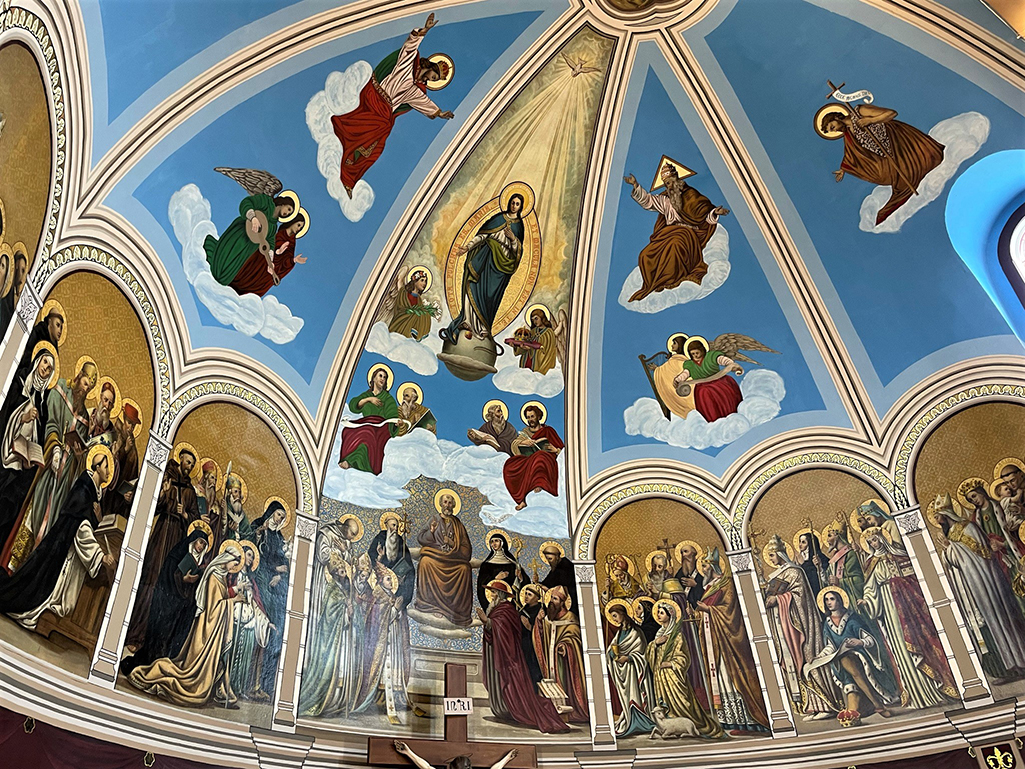 A major renovation to the church in 2010 included the creation of stunning stained-glass windows by Saskatchewan artist Elaina Adams. Almost a century between the making of the art forms, the coloured light through Adams’ windows spotlights Imhoff’s works.

Visitors are welcome to attend Sunday mass at 10 a.m. The cathedral is locked but tours can be arranged by calling Fr. Demetrius Wasylyniuk, 306-682-1783. Should you wish to learn more about the Benedictines, St Peter’s Abbey across the highway offers guest rooms with home-cooked meals.  Email guestmasters@stpeters.sk.ca 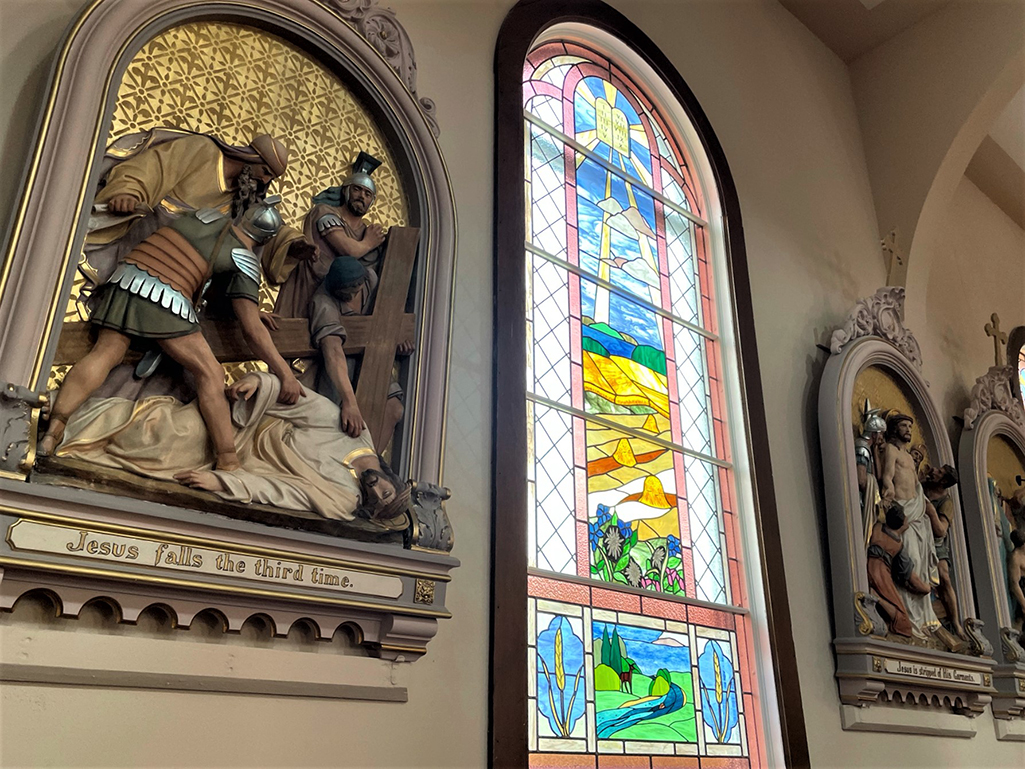 In the blazing heat of a Sunday summer afternoon, Meacham, Saskatchewan (population 80) swelters in hushed stillness. A golf cart with a floppy-eared dog as the passenger is the only sign of life. Yet here in this small rural village a growing arts community thrives.

Forty minutes east of Saskatoon, the Dancing Sky Theatre with its outdoor bleachers is backdropped by prairie fields and namesake blue skies. Established in 1993, the non-profit charitable organization continues its commitment to the support of new artists and writers in Saskatchewan. 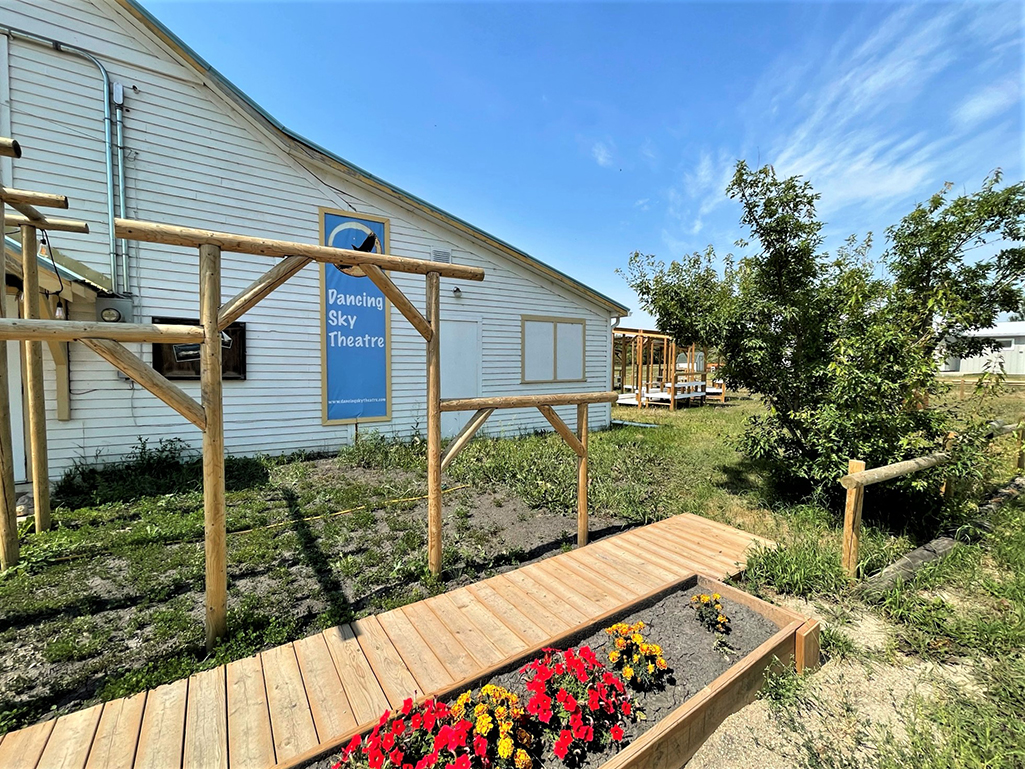 All 47 theatre productions to date have been Canadian. Of those, 34 were world premieres. The shows are presented in spring and fall, with a dinner picnic option for patrons. To ensure entrance to the show, tickets can be purchased in advance. 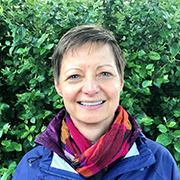 Living in Calgary, Alberta, Sue and Dave have been best friends and married for almost 40 years.Their adventurous spirits keep them living the theme of ‘never too old to explore’. Well into the second half of the game of life, they strive to inspire others to seek out new experiences whether that be on the other side of the world or in their hometown. Their genuine story telling approach has created a loyal and interactive audience on their blog Travel Tales of Life, as well asover 55,000 social media followers.