Bruin and I have a knack for attracting bad weather. From mudslides, to snowstorms, to sandstorms, we’ve seen it all. So it came as no surprise that it was pouring rain as we put Vancouver in the rearview and set out on the Trans-Canada Highway. This time we decided to find adventure in Canada’s Midwest, Grasslands National Park.

Saskatchewan is where I was born and spent my childhood. Despite my family’s migration to Canada’s mountains and coastlines, prairie roots run deep and Saskatchewan will always feel like home in some way. It’s no secret that the beauty of the prairies is lost on some, but to me the big skies and open farmland have a simple elegance that I find captivating.

As we followed the dotted line eastward, past blurry fence posts and old gas stations, every kilometre brought with it another memory: summers spent with my cousins on the farm or lacing up my skates on a bone chilling winter night. I was excited to share my stomping grounds with Bruin and to capture our journey.


With the Pacific and the Rockies well behind us, the rain slowly abated. It wasn’t long before we were alone on the highway, southbound to Val Marie. The noise of the city and buzzing of my phone were replaced with our typical road trip soundscape: Johnny Cash, nuanced conversation, and the pitter of gravel against the under carriage.

We rolled past the park gates just as the good light was setting in. Many an hour on the drive had me thinking of what I wanted to photograph and how I wanted to document the area. It didn’t take long for me to see one of the scenes I had envisioned. Five minutes down the park road, two male bison were grazing amongst the wildflowers. Miles behind them, we could see their herd meandering on a grassy hill. We watched them until the sun dipped below the skyline and then made our way to our campsite.

An Overwhelming Connection to the Past

Our first night was spent in tipis at the Frenchman Valley Campground. After taking a few photos, we each picked our own tipi to sleep in and retired. It was an incredible feeling laying there. As I surveyed the stars through the hole in the canvas, I felt an overwhelming connection to the past. The earth under my sleeping bag, the rumble of far-off thunder, and yips of coyotes — all pieces of a land that people have marveled at as long as we’ve known it.

Each morning we awoke to pre-dawn light, and scanned the horizon for signs of life. Our stares were often met with the curious faces of white tail deer, sometimes miles away. I was surprised by the diversity of wildlife in the park. In addition to the deer and bison we saw pronghorn antelope, coyotes, ground hogs, beaver, prairie dogs, swift foxes, coyotes, porcupine and even a badger. All seemed undisturbed by our presence and inquisitive. The effects of humanization haven’t yet been felt in the park.

Maybe the biggest highlight of the trip was our horseback tour through the West Block. Our guide Dennis is as old school as they come. He runs a ranch just north of Grasslands and knows the place better than the back of his grizzled hand. He offers horseback tours through his company Ride with Lamotte and we met him at his trailer around midday to saddle up.

I was a bit apprehensive after Denis informed me my horse’s name was Buck. I found out why moments later after pulling up too sharply on his reigns. As the horse reared, Denis barked at me to “give the him his head” and no sooner had I let up on the reigns then Buck calmed and started chewing on some yellow flowers he was fond of. Denis chuckled and started off down the trail, leading Bruin and I south-east to the far tip of Grasslands' west block, and the northern border of Montana.

We followed an ancient horse trail through hills of grey sand, pocked with tufts of greasewood and wildflowers. The scent of prairie sage played in the warm air, wafting up and down the rolling hills. As we plodded along, Denis filled our ears with tales of wanderers and outlaws who had once walked the same trail. We led our horses across a stream that Sitting Bull forded as he fled General Custer after the Battle of Little Bighorn. Eventually we came to a white stone that marks the Saskatchewan/Montana border, a place once visited by the notorious train robber known as the Sundance Kid. The entire time we rode we were alone, specks in a vast landscape, vulnerable but simultaneously free and so alive. This is the wild west. Once again I felt that ancient connection to a time before cars and train tracks.

Meteors and the Milky Way

As we made our way back Bruin inquired about a good wilderness camping spot and Denis obliged. He trotted down the trail, past a ranger station that had seen better days, to the top of a coulee. It was there that we would set up camp for our last night in the park. Denis assured us the night sky would be worth waiting up for before undressing the horses and leading them back into his trailer.

He was right, it did not disappoint. The night was moonless and the Milky Way hung above our tent in a massive bow. We could see what must have been one hell of a storm far to the north. Every few minutes lightning would light up the distant clouds in a purple flicker. I just sat in the eerie quiet, taking it all in.


Suddenly something flashed white and bright behind me. I turned; half expecting to see Bruin with is camera flash out. What I saw instead gave me pause. A meteor blazed a bright green and red ribbon across the sky. The streak continued for several seconds before breaking up into several pieces, like some heavenly firework. It was truly remarkable. That night we slept well in the silence of the wild. In the morning we enjoyed one last hasty breakfast cooked on the Coleman before packing up and heading out.

As we drove, I rifled through photos on the back of my camera and reflected on the trip. I wondered how many times Grasslands had unveiled secrets like the ones we saw, and how many more await those patient enough to hear them. To me, Saskatchewan as a whole is a diamond in the rough: a world apart in the minds of most Canadians, often passed over, even picked on. But it makes no boasts. It's never claimed to be what it isn't, and I’ve found that it will surprise you, charm you, and make an offering of a quiet moment in an untamed space. That is something to be treasured. That is something to be shared. 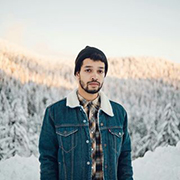 Based out of Vancouver, B.C., often found exploring the rugged coastline and immense mountains of Western Canada. His primary aesthetic is focused on vast landscapes and how people connect and interact with them.