One Week on the Badwater River

Crystal blue lakes, sand dunes, cliffs, and waterfalls - exactly what you hope to find on a canoe trip in northern Saskatchewan! The Badwater River, about 700 km north of Saskatoon, has more changes in scenery than any river I’ve been on.

Our seven day trip on the Badwater was inspired by some amazing photos posted on Instagram by Levi Kalinsky and his friends, who had paddled the river in 2016.  After looking at Levi’s photos, it didn't take long to put together a group of eight people committed to using up their holidays for a new expedition.

With all our gear and canoes loaded, our crew left La Ronge at 6:00 a.m. on June 3.  After a 6-hour drive up Highway 102, we arrived at Points North, a northern freight hub specializing in bush flying.  At the Points North dock, we transferred half our gear onto a single Otter float plane that we had chartered for a flight to Pasfield Lake.  After a quick turnaround, the plane made a second trip back to Pasfield to bring the rest of the outfit.  On the plane, the excitement of our crew was sky high as we shared looks of incredulity, and then quickly went back to staring out the window at the vast expanses of greenery, lakes, and meandering rivers. 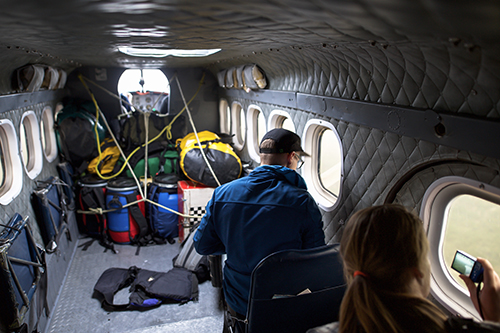 Our drop-off point was at a sand beach on the northeastern shore of Pasfield Lake which some speculate was formed by a meteorite impact.  Its impressive 220 metre depth suggests a meteorite origin, but it is missing some geological evidence such as impact quartz to prove this. 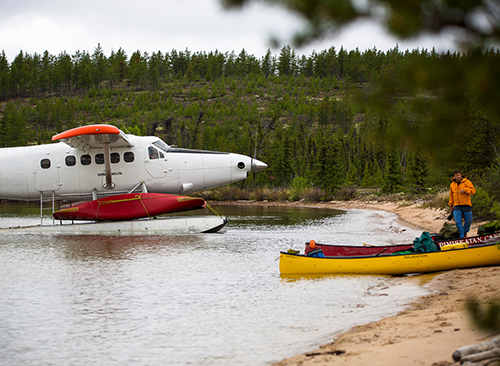 Once the second trip of people and gear arrived, we paddled off to find a campsite.  I had been hoping that the part of the lake we started at would still have ice in the vicinity but it had gone off just a day or two earlier.  We did luck out and find remnants of the lake ice shoved along the shores of some islands.  This year’s ice shove had reached four or five metres, high enough to scrape bark off trees on the islands’ shores. 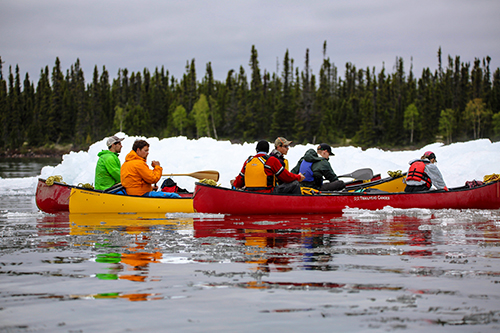 On the second day my dad cooked us up some bacon and eggs - this was our last luxury breakfast before the porridge breakfasts began.  After eating and breaking camp, we canoed to where Pasfield’s outflow marked the start of the Badwater River.  While still on Pasfield, we couldn’t get over how clear the water was, much different than on some Saskatchewan Lakes that are dark and full of organics.  We spent much of the day either running minor rapids or wading our canoes through rock gardens too shallow for paddling.  In one stretch, we encountered hundreds of suckers swimming up against the current on their way to spawn. 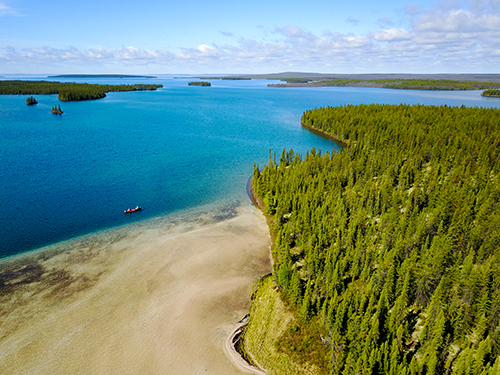 We stopped to camp at a beautiful sandstone ledge after our day of navigating the upper portion of the river.  The rock ledge made a perfect kitchen, and we had a chance to swim and wash up before putting on bug nets to hide from the hordes of mosquitoes. Later in the evening, a bear came by to check out our camp. It was curious but scampered off after a while. 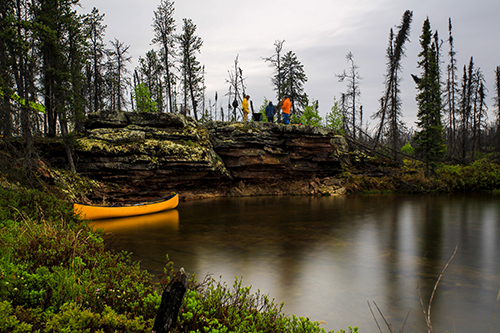 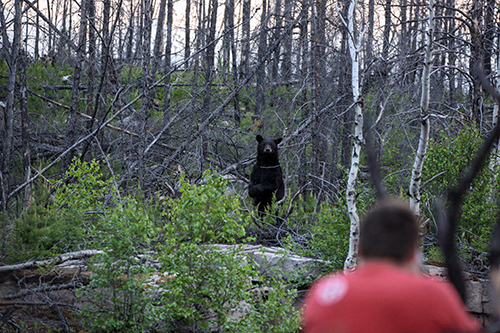 The third day brought rain and still more shallow rapids.  The upper Badwater River didn’t have much flow, but streams and runoffs gave it more volume as we went downstream.  During the day, we lined the canoes down a rapid ending in a ledge, and also portaged above a sandstone canyon to avoid a waterfall.  Everyone in the group kept things positive despite our soaked clothing and gear. 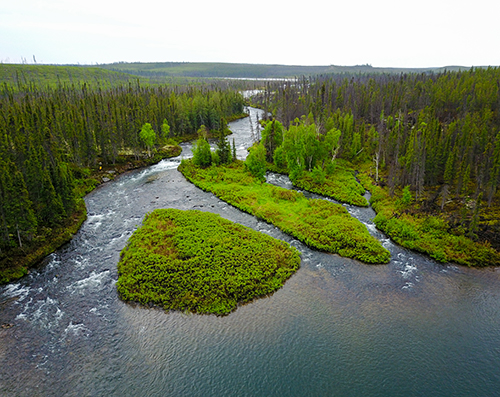 On day four we woke up to blue skies and a good breeze that quickly dried our clothes.  We spent the day cruising through canyons and rapids, some of which were 500 metres long and we had lots of fun practicing our whitewater skills.  Two of the more experienced paddlers would go ahead and we would follow their line and hope for the best!

The Badwater is rich in animal and bird life.  Throughout the trip we saw moose, bears and many birds.  The river is also a favourite of bald eagles, and we saw a nest on a sandstone spire that rose 25 metres above the river.  Some people from our group were able to climb to a vantage point where they could observe that the nest held newly born eaglets. 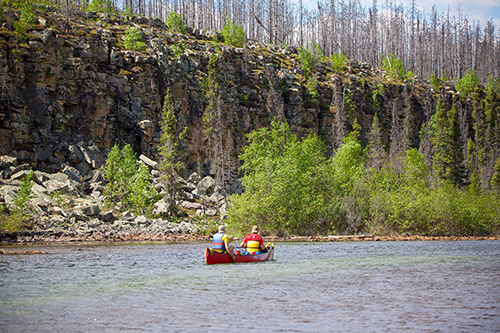 That evening, we camped among metre-high jack pines growing up from an old burn.  For supper, we had chili with cornbread baked on top, a pretty deluxe way to end our fourth day! 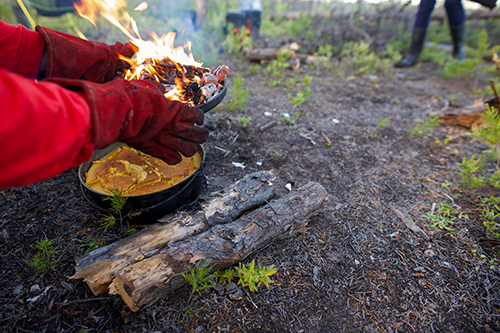 After supper, we watched the sun set.  It was rich with colour and continued to get better for hours. Being early in June and quite far north, the sky never went completely black at night. 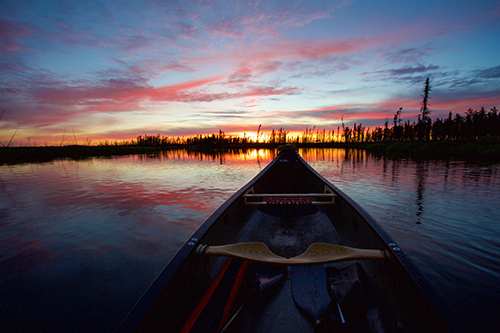 Five days in we reached the Cree River, which the Badwater flows into.  We spent a short time on the wide, fast-flowing Cree before we turned upstream onto the Pipestone River.  We had heard there were impressive sand dunes up the Pipestone and decided to go off course to see them. 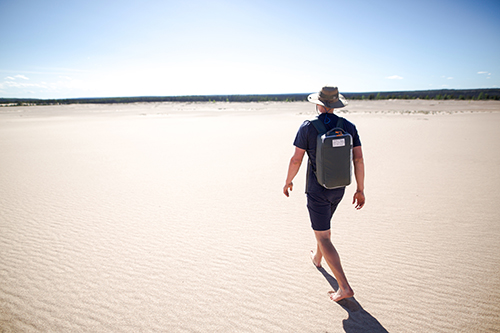 The sand dunes are enormous and mostly free of vegetation.  We wandered about, played bocce ball with rocks we had found, and checked out the dunes’ eastern border where a jack pine forest was being slowly swallowed by encroaching sand.  The Pipestone River sand dunes were beyond our expectations, and to top it off, they were surrounded by a pristine lake to swim in. 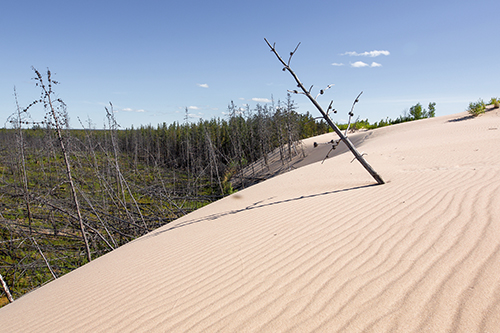 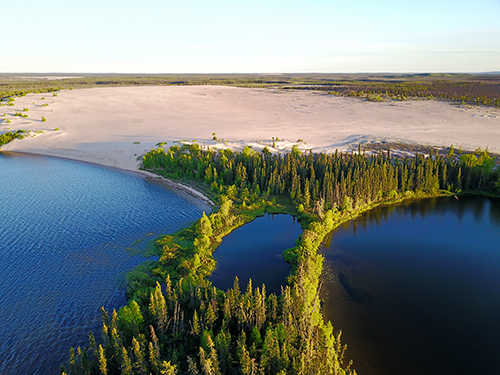 We caught some fish for supper and camped within view of the dunes and a few people actually decided to try sleep on the sand dunes.  Unfortunately, they were bombarded by bugs and came back at midnight but said that if they had their tent, it would have been an awesome place to sleep.

The next morning, we were woken up by a sandhill crane making its turkey-like call within steps of our camp. We were all soon up and starting Day 6 with our usual porridge breakfast.  We then said goodbye to the sand dunes and went back down the Pipestone River to connect back to the Cree River.  It was a lazy day since we had strong currents pushing us at a good pace. We pulled our canoes together and rafted down the river until we found a good jack pine campsite. 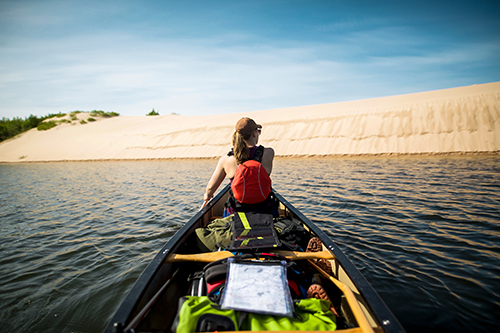 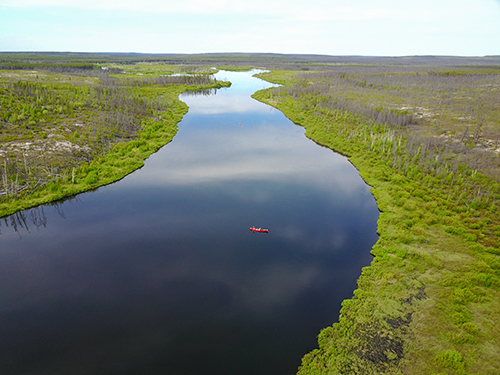 Supper was fuelled by fish again and and it was possibly the best meal of my life.  Fish tacos garnered with lime, salsa, onions, and cabbage.  It was windy which kept the bugs down and made for a great evening. 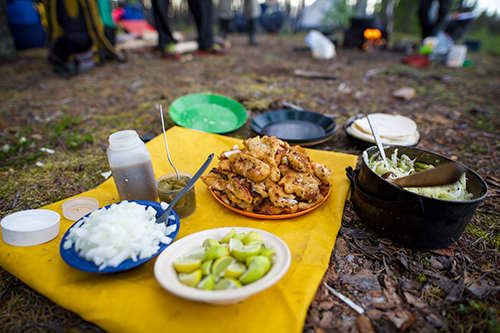 A northeast wind picked up that morning and made for huge waves on the 50 metre-wide Cree River.  With the wind often against us but still with a helping current, we paddled 20 kilometres to reach Wapata Lake, our biggest lake since leaving Pasfield, and stopped for lunch.  We assumed we would have to wait the wind out on shore, but then we decided to try to set up sails to get across.

After watching two of our crew sail off with no problem, we tied our remaining three canoes together and built a sail out of tarp.  The first part of the lake was easy and fun but then the waves started to come over the gunnels and things got a bit tense.  After two hours of sailing, we safely made it to where the Cree River flows out of Wapata Lake.  We set up camp just a short distance downstream.

Saturday, June 10 was the eighth and final day of our trip. We paddled the final few kilometres to our end point at the Cree River Bridge on the road between Stony Rapids and Points North. When our shuttle drivers arrived from Points North with our vehicles, we packed up our gear and the canoes and drove back to La Ronge that night.

The trip was incredible with so many different sights to see. The crew consisted of my parents Sid Robinson and Hilary Johnstone; friends Nathan Jones, Jimmy McDonald, Scott Fraser, and Dylan Stryde; my girlfriend Nichole Moen, and me. I was lucky to have my parents do all of the gear preparation and logistics as well as have an experienced paddler such as Jimmy to show us how to live like kings and queens out in the wilderness! 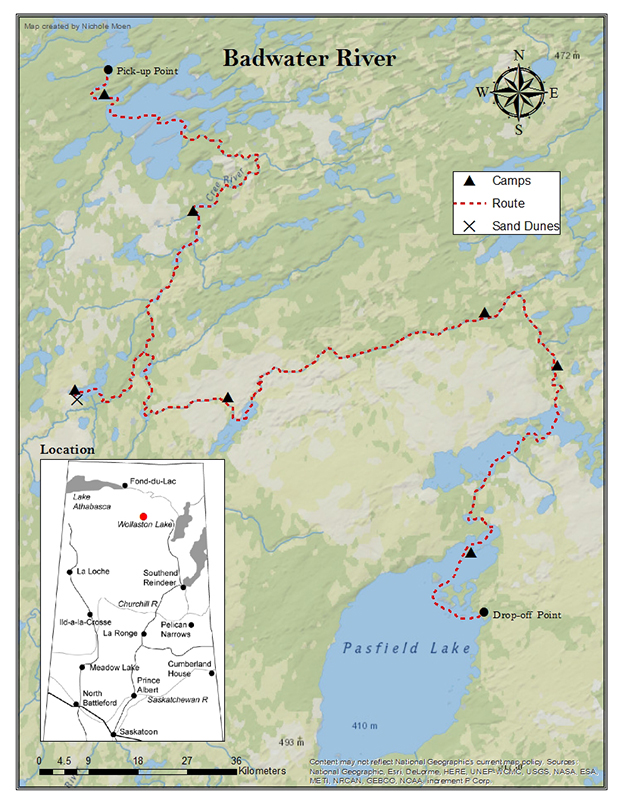