A couple of summers ago I spent some time at Hatchet Lake Lodge, north of giant Wollaston Lake and pretty much in the middle of nowhere. I was up there on a still photography shoot. Our mission was to grab some great fishing scenics and high-res photos of trophy northern pike, lake trout, walleye and Arctic grayling. The photographer I was with, whose pictures you see here, was Kevin Hogarth. He worked pretty hard as some long days were spent chasing perfect light. 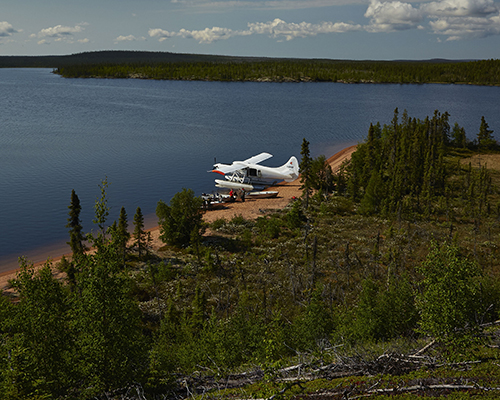 When you head way up north, you know there’s more wildlife than people. Often the boreal forest hides all the animals that make their home in the trees. You expect to see bald eagles, which we did. But other animals, such as black bear and moose, were only visible to us in tracks in the sand and poop on the ground.

On a short fly-out out to nearby Nordby Lake, our plan to fish for northern pike and lake trout was delayed when we had to fix a damaged gas line that connected our aluminum fishing boat’s gas can to its motor. The damage was caused by a black bear. This indiscriminate diner also chewed up the boat’s padded seats.

While our experienced and unperturbed guide worked on the motor, I followed the bear’s tracks down a line where the sand beach met the lake’s clear waters. Mature male black bears will weigh between 90 and 180 kg (200 to 400 lb.), with very few exceeding 225 kg (500 lb.). They can live up to 25 years. I’m no expert; however, based on the tracks I saw, my guess is that our bear was on the lower side of both size and age. We climbed an esker to photograph this transition zone between northern coniferous forests and sub-Arctic forest tundra, not really thinking about the bear, knowing his or her cautious nature would keep distance between us. 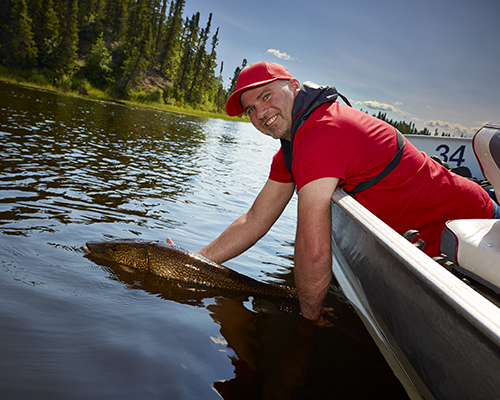 Back on the water with our boat’s problems solved, a little before noon, after catching, photographing and releasing a couple of 40-inch plus pike, we rounded a corner and spotted a lone white wolf sunning on top of a sand esker where I assumed sands shifted too much for trees to crowd out the open space. I’d seen wolves before, but they were only fleeting moments as the reclusive creatures quickly loped off into the forest. This was the first white wolf I’d ever seen. And this fellow seemed indifferent to our presence. For quite some time, the full grown male watched us fishing maybe only half the width of a football field away. Occasionally, he snapped at what was likely a horsefly bugging him. 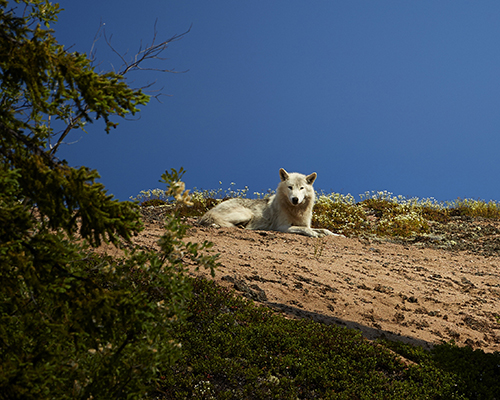 Wolves are a love ‘em or hate ‘em species. In the more populated southern forests of Saskatchewan, where large game animals are required for food and generate economic value through sport hunting, Canis lupis is not always a wanted resident, especially when its population climbs beyond what is needed for proper balance. Way up north where we were, there’s a harmony that can be enjoyed and respected.

Timber wolf packs can cover a range of more than several hundred kilometres. In this particular region of Saskatchewan white wolves are unusually common. Something else was different. All of the other wolves I’ve seen travelled in a smooth lanky and loping motion. You are not supposed to see them walking for more than a few feet at a time. This fellow never trotted. When we got too close, he slowly walked into lower down scrub brush and watched us through the branches. Then he casually and indifferently made his way back up into the full sunshine for a while, before sauntering into the solitude of the trees, leaving only a memory of his presence. 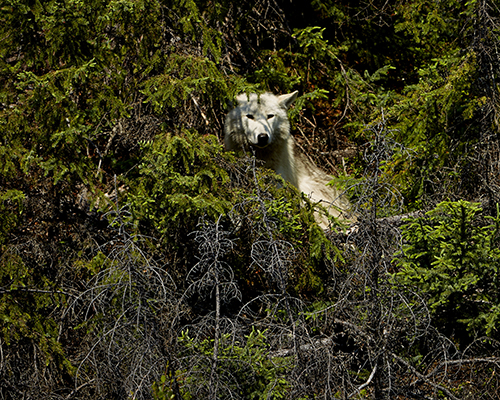 This encounter supports my notion that a fishing trip in northern Saskatchewan is as much an adventure as it is about the fishing. This comfortable immersion in the wilderness is calming food for the soul. You are in a place that hasn’t changed since forever, where the only humans you see are the handful also spending time at your fishing lodge. Even there, you mostly only connect with other anglers in the main lodge’s dining room before and after heading out on the water. (Of course the adrenaline rush of catching big fish and lots of them is a pretty good thing too. But that’s another story.)

Gerard is an advertising consultant with Tourism Saskatchewan. His dream job is the one he has. Though an offer to be the photo editor for National Geographic Magazine might tug him away.