Each time I’d catch a nice lake trout, Trevor Montgomery would respond with this short phrase describing the small size of the fish, compared to what he was used to catching at Tazin Lake. As I admired the fight this strong specimen being reeled in gave me, he’d raise it from the water and with a quick flick of his wrist, he’d safely release it.

“We’ll get bigger ones,” he’d reassure me each time.

What I didn’t know then, was that over the course of the next six days at Tazin Lake Lodge, I’d end up hooking into more giant lake trout and northern pike than I knew what to do with, culminating with a 56-pound behemoth as the last fish of the trip.

My first experience at Tazin Lake Lodge took place in 2016. I’d never been to Saskatchewan before and as I stepped on the floatplane, my eyes were wide-eyed as a kid on Christmas morning. While a few of the passengers took advantage of the ride to nap, I studied each and every lake we flew over, wondering what swam beneath its surface. As you approach Lake Athabasca, things get very interesting ecologically. An expansive sandy landscape spreads out below along the south shore of the big lake. The Athabasca Sand Dunes Provincial Park is one of the most northerly active sand dunes on the planet and extends for approximately 60 miles. It passes underneath us quickly and soon all that can be seen is water.

Lake Athabasca is the 8th largest lake in Canada, stretching for 176 miles. It covers over 3,000 square miles and sits partly in Alberta. A big body of water for sure, but not the one I was headed to. We passed over Camsell Portage on the north side of the lake and soon the ground looked vastly different than the south side. Large, rocky outcrops jutted upwards as small wetlands filled in the low areas between them.  Not only do these mineral-rich Precambrian hills protect Tazin Lake, but they also have a long history with exploration in the region. They offer the most exciting portion of the ride, partially because you know that once you’re over them, you’re within minutes of landing. 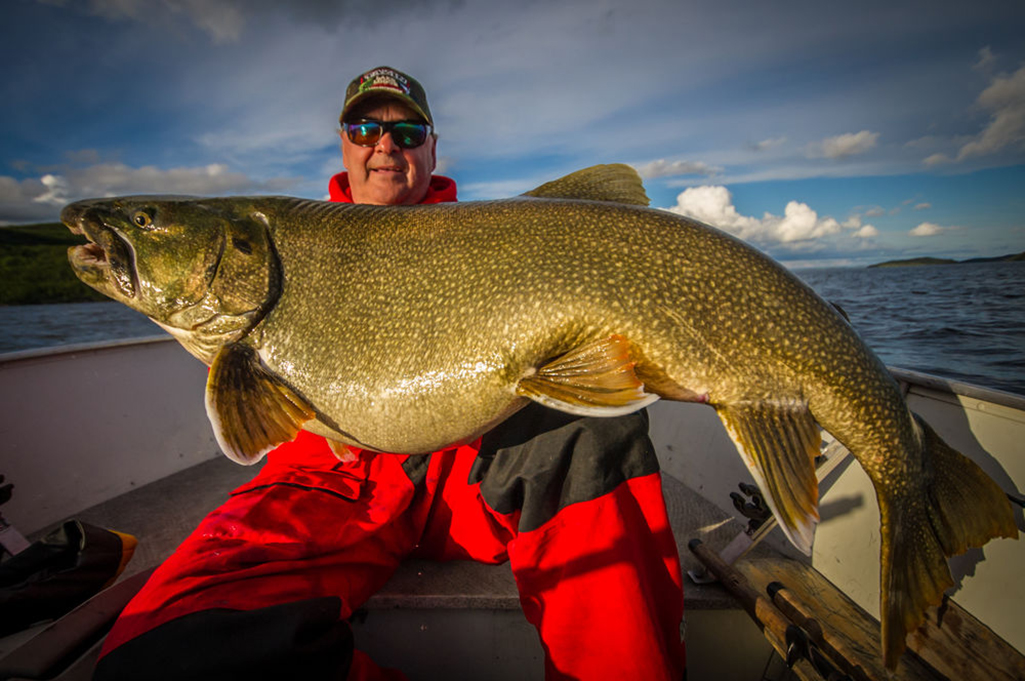 Tazin Lake is deep, clear and cold, making it prime for growing enormous lake trout. While other lakes in the region share similar characteristics, Tazin has two major benefits that the others lack:

The lake is accessible by floatplane only. Tazin Lake Lodge is designed to accommodate a small number of guests each week to keep the fishery healthy and offer a more personal experience. Catch and release is practiced with all the large fish, while smaller trout and pike are cooked up for shore lunch.

The region has a long history with mineral exploration in northern Saskatchewan. Gold and uranium mines have been carved out while a major project took place in the 1930’s to produce hydroelectric power. A 1 km tunnel was blasted out through a rocky hillside and the lake’s current was rerouted from north to south, no easy task for this 25 by 10-mile body of water. A spillway was built on the west end and the lake’s level rose by 14 feet. This created new changes in the lake’s management and since the Tazin upland region is in a special management zone, no netting is allowed. 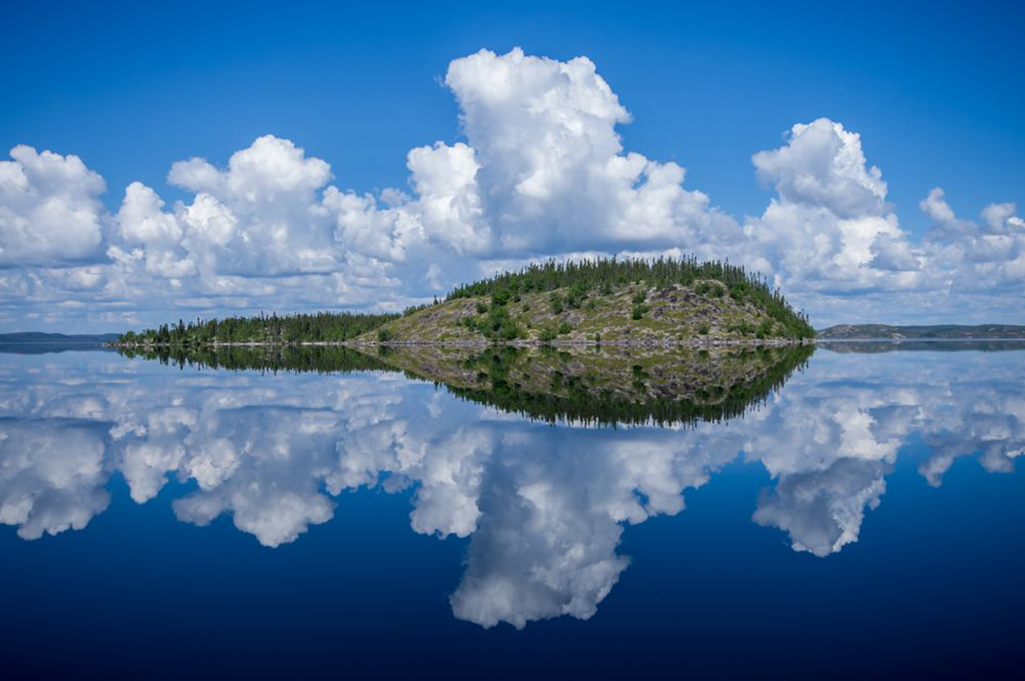 After catching a few “piddlers”, Montgomery informed me that I was ready for big fish country. While giants can be caught anywhere on the lake, getting new clients to Tazin on smaller fish allows some acclimation to the gear being used and just how to fight those big fish. I should also clarify that the “piddlers” on Tazin might be considered trophies on other lakes. Catching a 5 to 10 pound lake trout back home gets the blood pumping, while you don’t even take pictures of those here. In fact, those fish can be so common that if you wanted to break the century mark for catches in one day, it’s possible to do so.

We travelled out to bigger water and while that can mean waves the size of semis on some of the famous trout lakes of the north, Tazin has an enormous windbreak centered in the middle, an island called Laird, breaking up the lake into four quadrants. In fact the island is so big, it has its own lake. 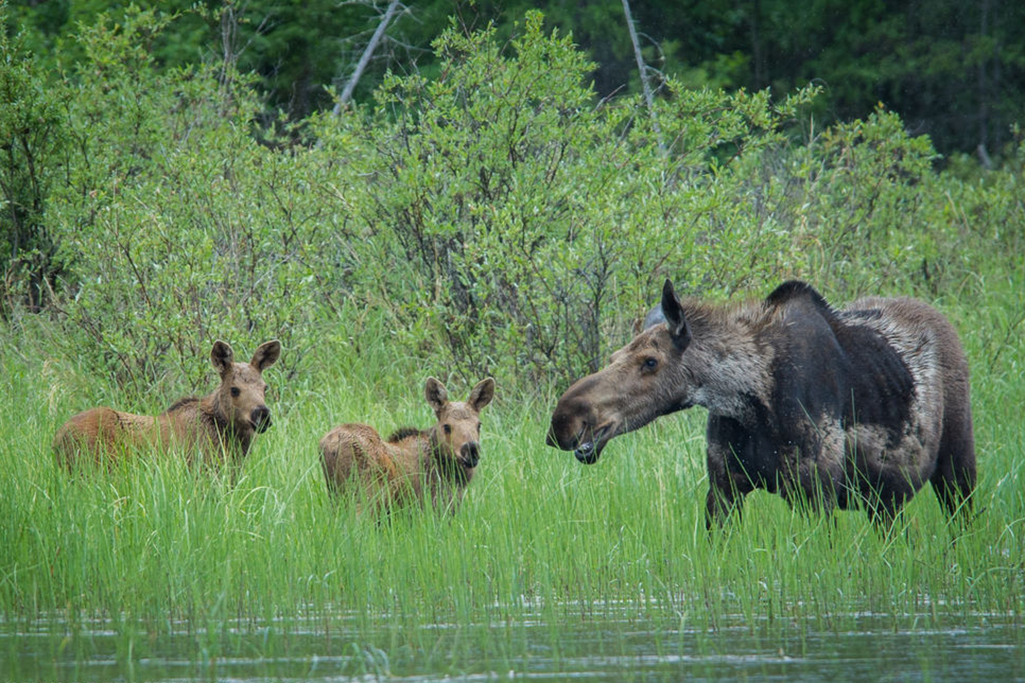 You become very familiar with that lake during a week-long stay at Tazin. It’s called King Lake and is absolutely loaded with lake trout and northern pike. It is fished often and also used as a shortcut to the north side of Tazin. Scenic shore lunch spots are hidden in protected bays, offering comfortable breaks during the day and exciting shoreline fishing. Make sure you search for the sealed up exploration mine that sits below ten feet of water when you go. The Indigenous guides that grew up in the area are full of knowledge and can show you a wealth of interesting history and tell stories of local lore.

While big fish are the draw at Tazin Lake Lodge, I always look forward to the experience. The rugged landscape features steep banks that continue below the surface offering deep drop-offs. Wildlife such as moose and black bear are easily spotted while eagles and sea ducks fly overhead. 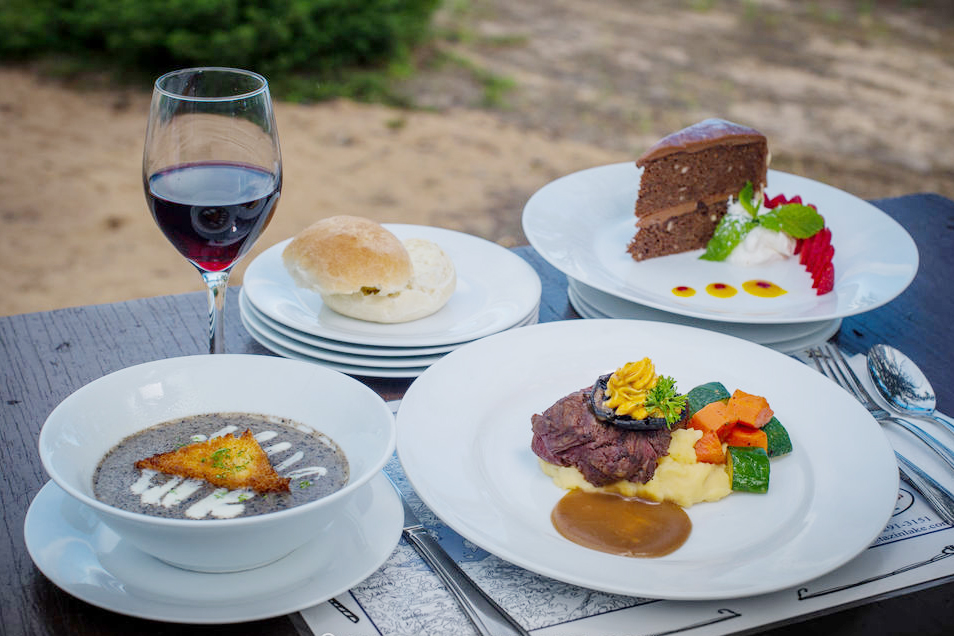 Part of that experience also includes the food. We can’t write an article about Tazin Lake Lodge without including the meals. The shore lunches are served up on a natural table and chairs, carved out of rock by Mother Nature. The guides have years of knowledge in the ways of fish prep and if you’re lucky, one of them will whip up a batch of bannock bread, an Indigenous staple. Save room for the end of the day as the 5-star chef will be busy preparing a meal fit for any fine dining establishment.

By the fourth day of my first trip, I had broken personal bests on lake trout and northern pike numerous times. In fact, I’d finish the week with 9 pike over the magical 40-inch mark, culminating with a new high of 43.5 in. I’ve since broken that mark each time I’ve returned to the lodge. 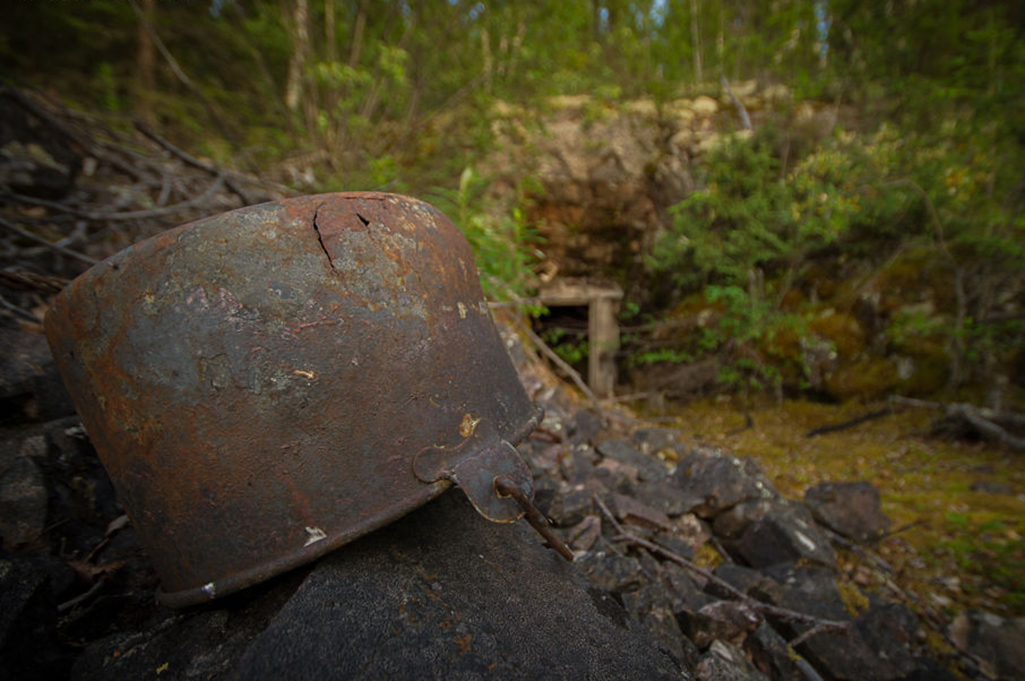 The highlight of the week was almost too good to be true. Each day we fished from 8 a.m. to 5 p.m., returning in time for hot food on the table. We had gathered an excess of footage for the TV show, including an episode for lake trout and a separate episode just for northern pike. It was our last night on the island and we had one more attraction we’d like to capture with the camera: an exploratory mine on the north side of Laird Island. After discussing it with our guide, lodge owner Trevor Montgomery, it was decided that we’d head out before sunset. 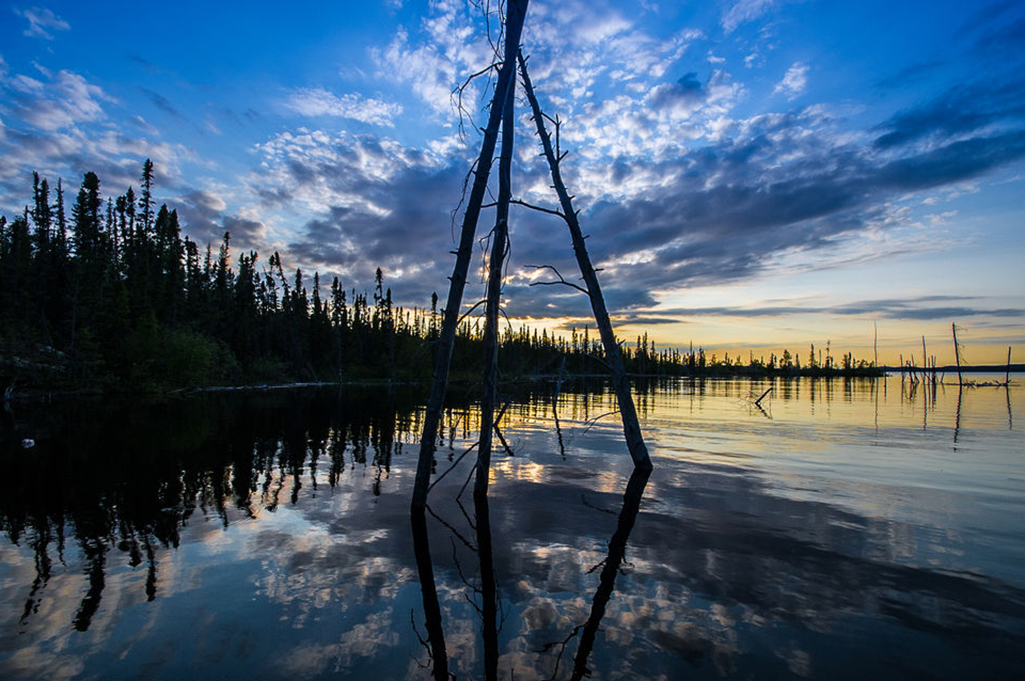 “Let’s bring the rods just in case,” Montgomery added as we pulled away from the dock.

As we headed through the shortcut of King Lake, the water was like glass. The sun glowed on the horizon and I relaxed in my boat seat, soaking in the sight. Not only was it my last chance to experience Tazin Lake, but it was the best weather we’d had all week. You couldn’t ask for a better culmination to the trip.

After getting footage of the old mine entrance, Trevor smiled and asked if we wanted to go fishing. What do you think my response was? 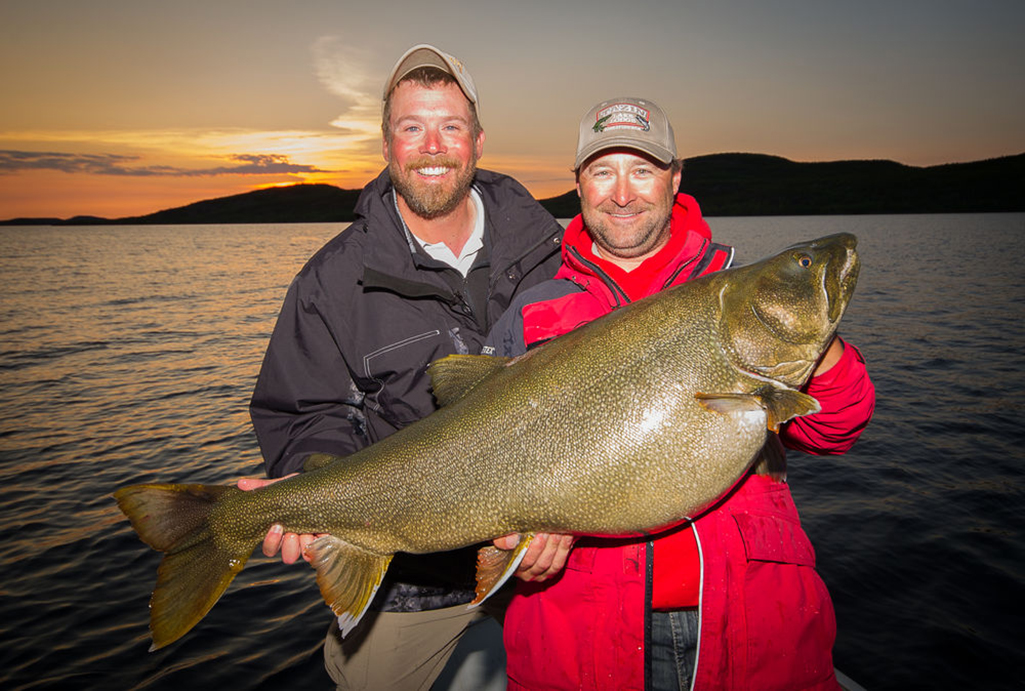 We began trolling slowly and it didn’t take long before he hooked into a trophy laker. Shortly after that, he caught another one. While I was using a lure that had worked well earlier in the week, it was clear that it wasn’t the most effective right now. We were taking one last pass and Trevor, being the good guide that he is, offered the same lure that he was using. Being the okay fisherman that I am, quickly accepted.

I dropped it to the bottom as fast as I could and 30 seconds later, I felt a huge thump on my line. I firmly set the hook and immediately knew I had a big fish on. The lake trout sat on the bottom and wouldn’t let me move it. Eventually it relented and the battle continued up and down the water column. Finally, we put it in the net and a flurry of high fives went around the boat. This fish was huge. It would easily be the largest I’ve ever caught, measuring 48.5 in. long by 30.5 in. around. I’ll let that last part sink in for a minute. The girth was over 2 and a half feet. This trout was not missing any meals. It was the perfect way to end the trip and it would be the last fish caught on the TV show, something you just can’t make up when you write a script. 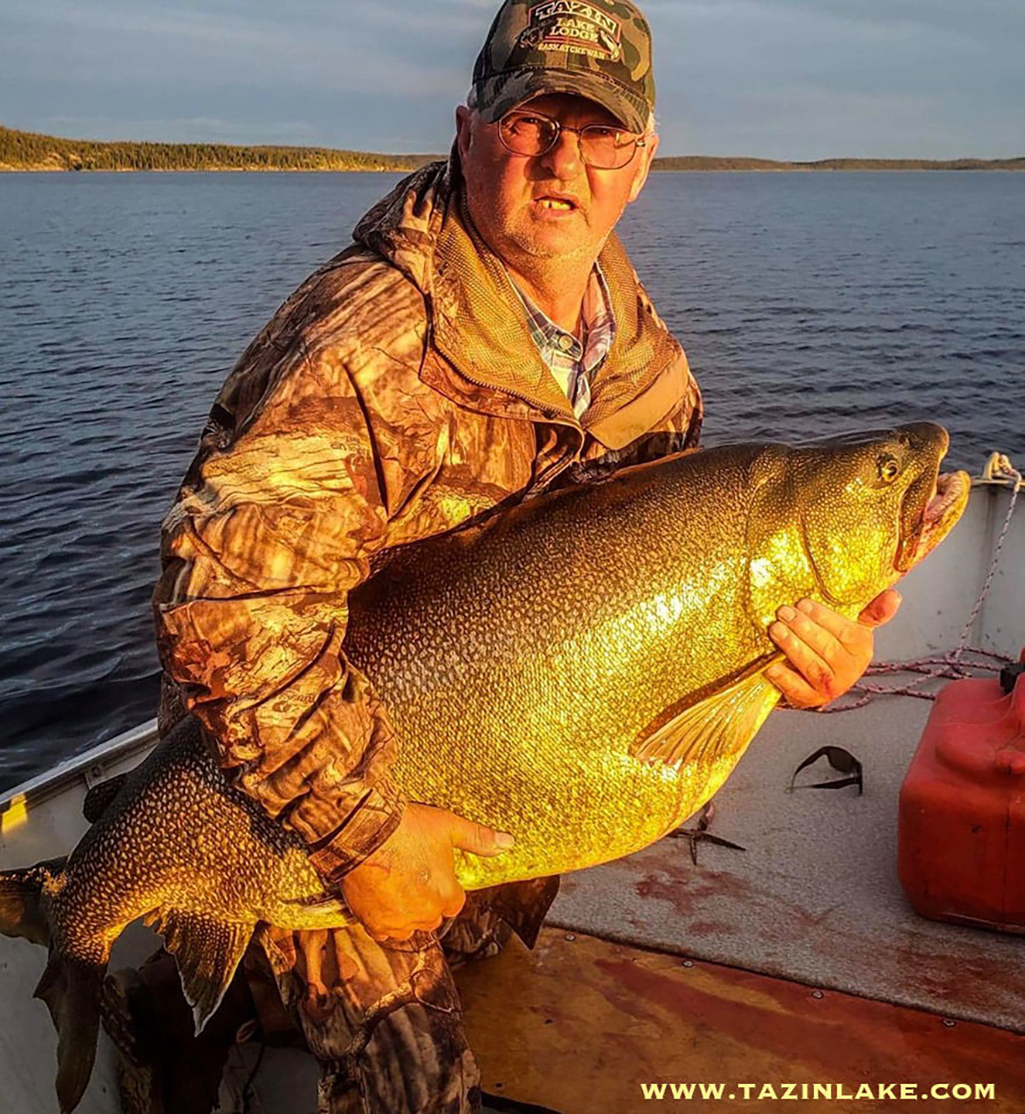 I’ve since returned each year since and have caught numerous lake trout nearing the 50-pound mark. All captured on a new YouTube series called “Tazin TV.” In 2019, I was able to net a 60-pounder and was there to witness a guest return to camp after catching a 72-pound monster, which is very close to the world record. There’s a record-breaker swimming in there somewhere and I’ll be back in 2020 to try and find it. 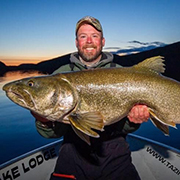