Mike Borger has spent a lifetime pursuing his passion for fishing and adventure in the outdoors. His interests evolved into a fulfilling career that has taken him across Canada’s north to countless fly-in lodges. He is in high demand as a trip planner and has a treasure trove of information gathered from more than 70 fly-in expeditions, many of which have been meticulously documented.

In July of 2016, Borger went to Blackmur’s Athabasca Fishing Lodge for a seven-day fishing adventure. As the editor of the recently launched Canada Fishing Guide magazine, Borger was keen to test the waters of giant Lake Athabasca. Pulling a trophy lake trout from the lake’s legendary waters was a dream of his since boyhood, and now he was ready to make that dream a reality. 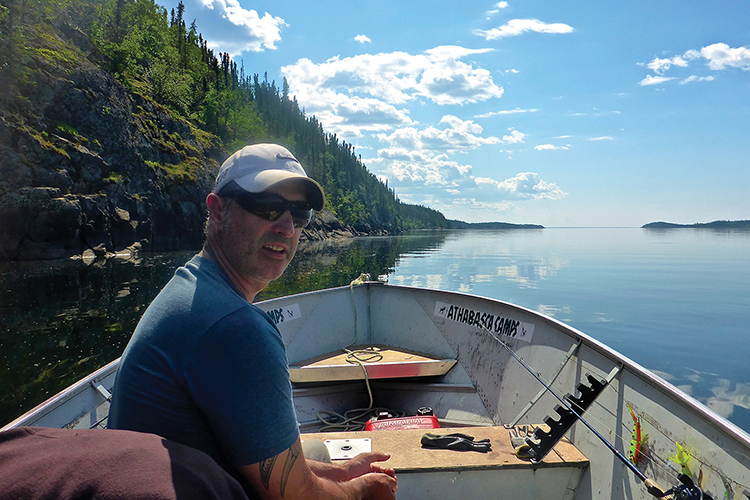 Athabasca Fishing Lodge at Otherside Bay is situated on the eastern arm leading into the lake. Lodge owners Cliff and Stella Blackmur have been hosting guests for more than 40 years. Local Dene guides, some of whom have been with the lodge for more than 20 years, know the land and water intimately. The facility has all of the amenities of a premier fishing lodge. Delicious home-cooked meals are served in the dining room, with a shore lunch of fresh-caught fish prepared by guides.

From the air, Lake Athabasca and the adjacent Athabasca Sand Dunes are mesmerizing sights. 100-foot (30 m) high dunes stretch for 60 miles (100 km) along the south shore. Stretching almost 200 miles (320 km) and full of back channels and bays along the northern shore, the place is a dream come true for anglers. “It would honestly take a lifetime to learn all of it,” Borger said. “We had a week.”

The early morning flight took the crew from Saskatoon (Saskatchewan’s largest city) to the landing strip at Stony Rapids. Here, they boarded a floatplane, which delivered them to the lodge in time for breakfast. Then it was out on the water for a day of pike fishing. Crew and gear were loaded into two 18-foot, 60 h.p. boats and powered toward a spot in a large bay fed by a fresh creek. Through the clear water, northern pike averaging 40 inches or more circled the boat “shark-like.”

After a delicious dinner back at the lodge, the crew headed out to do some trolling and casting for lake trout. “We caught fish, after fish, after fish,” Borger said. “They smacked our lures with unabashed violence and fought like demons. It may be one of the most enjoyable evenings I’ve spent fishing in a very long time.” 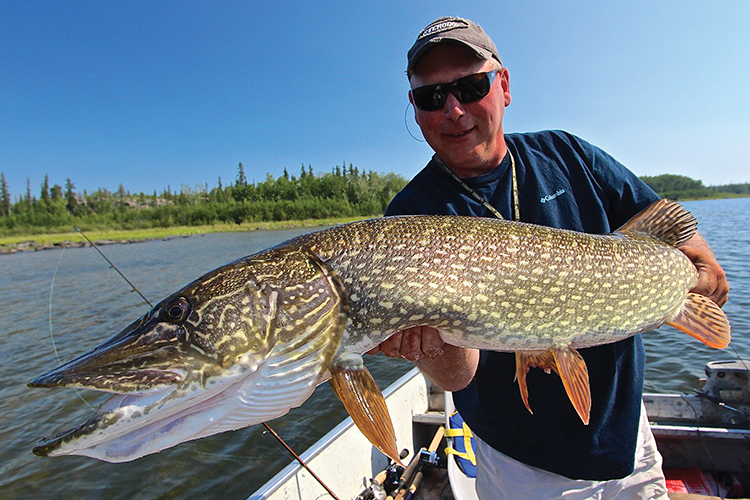 On the second day, Borger and his party investigated some of the enormous bays west of the lodge. By mid-afternoon, they landed nine pike that measured over 40 inches, as well as 50-60 mid-size catches. Heading north, they found a deep, secluded, rocky bay with a creek flowing into it. “The bay was water-glass clear and everywhere we looked, we could see pike roaming about like packs of wolves. The Latin name for pike is Esox lucius, which translates to ‘water wolf’ – very appropriate,” Borger said.

Borger waited until his fourth day to venture further into the centre of Lake Athabasca. They reached a spot on the water known for its abundance of lake trout. Borger is a believer in the formula that big baits equal big fish. He sunk a 9.5-in. paddletail bait into the water, something he had never tried with lake trout. The fish could not get enough and more than fifty were caught and released, including one that measured 45 inches. There was still time in the day to explore the north shore, where a series of back bays and channels are northern pike territory. Here, they landed plenty of fish in the shallow, weedy water. That evening, Borger had his own tale to tell about the one that got away: a behemoth northern pike that caught Borger by surprise and made off with the oversized spinner bait and 12 inch titanium leader.

On the sixth day of the trip, Borger decided to go after trophy lake trout. Out on the lake early, the crew settled on a spot where lake trout hovered in numbers. Suddenly, one of the giants grabbed Borger’s oversized lure and “took off like a freight train.” The colourful 43 incher fought hard before being reeled in. Only 15 minutes later, Borger hooked a 41inch lake trout.

On the morning of the last day of what Borger was already proclaiming an “epic trip,” the crew went out to catch more northern pike. They took the advice of other guests and spent the afternoon fishing for walleye right in front of the lodge. Upriver from the main body of the lake, the water here is fed by a narrow channel lined with weeds. Borger marvelled at the sheer number of walleye. Sixty or so bites later, he was wrestling with something considerably larger. It was another massive northern pike. Reeling in this one with light tackle and through weeds proved a memorable challenge and a perfect ending to his adventure.

For more photos and details on Borger’s fishing trip to Lake Athabasca, check out “Fishing for Giants on an Inland Sea” on canadafishingguide.net.

Find out more about Saskatchewan fishing outfitters by clicking here.