Everyone knows anglers are incorrigible liars. So for years I listened to tall tales about fishing in northern Saskatchewan with a healthy skepticism. But after my trip to Cree River Lodge in June 2016, I can tell you that all the stories are true.

As associate editor of Outdoor Canada magazine, I’ve fished in wild northern regions in Manitoba, Quebec and Ontario. I’m especially fond of targeting northern pike, preferably on a fly rod, and over the years I’ve landed about a dozen trophy northerns (fish over 40 inches). I’m not exactly a tenderfoot. But Cree River Lodge, located just 120 kilometres south of the 60th parallel, was unlike any place I’ve ever experienced. It was pike paradise.

I have never beheld—or to be honest, even imagined—such a concentration of truly large fish. Even better, most fish were in water less than three feet deep, which is rare in southern Canada and the lower 48 U.S. states. For the uninitiated, finding big northern pike in shallow water lets you fish mostly by casting, which is always fun. Shallow-water fish are also ideal for targeting with fly-fishing tackle. And thanks to the clear water, it was often possible to sight-cast to individual pike—a thrilling way to hunt big fish.

So with that background, here are a few highlights from my four days at Cree River Lodge. Things got off to a great start on the first morning, when my friend Dan Armitage of Columbus, Ohio, landed a hefty 42-inch pike (photo above). That eclipsed his personal best northern—by 12 inches, and about 10 pounds. And then in the afternoon, I landed my own 42-inch pike, and on a fly (photo below). Either of those fish would have been the catch of the trip, and it was still our first day. In addition, it was becoming obvious that these were not ordinary fish. Pike are often skinny, but these northern Saskatchewan fish were thick, broad, powerful, and well-fed like I’ve never seen. 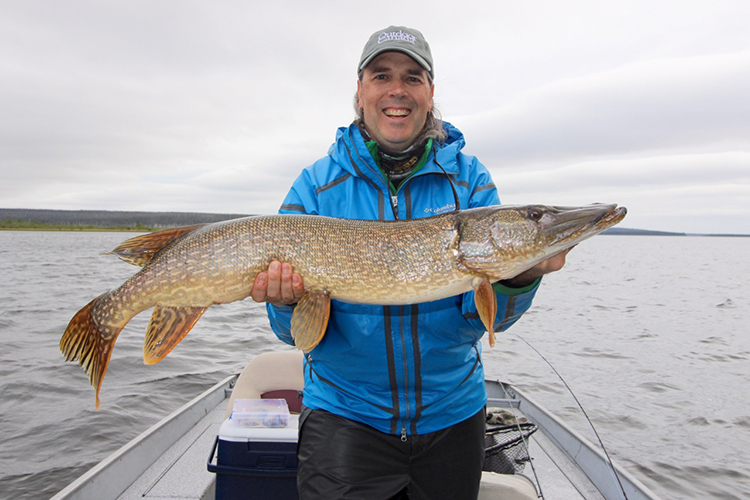 Next day, lodge owner Pat Babcock took my group of four on a 30-kilometre trip up and down the wild Cree River in his jet boat. It was the single best day of fishing any of us had ever experienced. I tell the whole tale in the 2017 Fishing Special edition of Outdoor Canada magazine, but all four of us landed trophy-size fish. And my buddy Lynn Henning from Detroit caught the biggest thing I’ve ever seen come out of fresh water—a 47½ -inch pike (photo below, Lynn on left, Pat Babcock on right). In addition, since the lodge requires anglers to use barbless hooks, all our big fish were released unharmed. 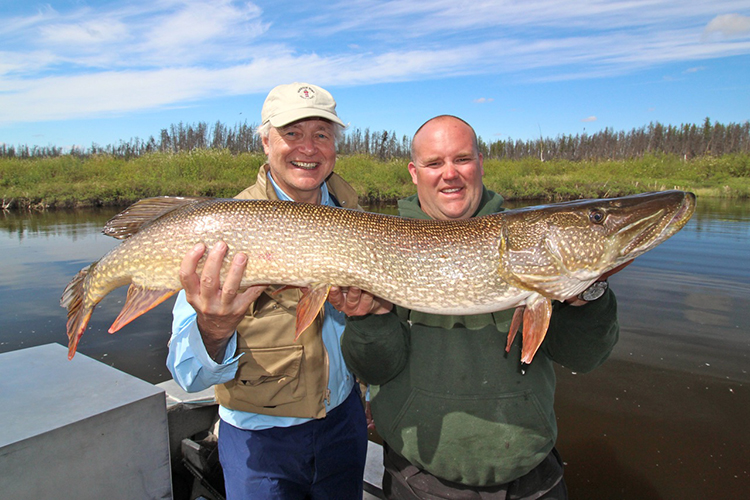 Just for a break, we tried some walleye fishing the next day and it was, frankly, ridiculous. There were so many walleye that it seemed like they were almost competing for the chance to hit our lures. That means it only took about 15 minutes to catch enough for a classic Canadian shore lunch of fresh fried fish—an essential part of any lodge visit (photo below). 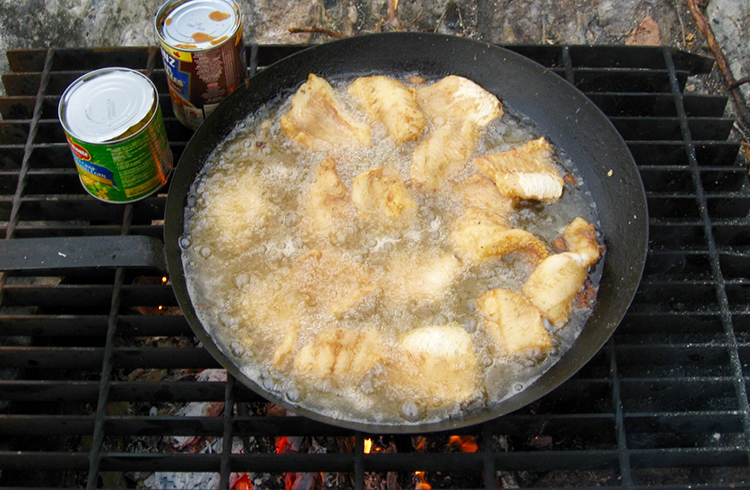 Since conditions were so good for fly-fishing, I packed away my spinning gear after the second day, and fly fished exclusively, which was a real treat. And it was effective, too. I landed another four trophy pike (photo below), plus too many to count in the mid-30-inch range. And although I’m not one to keep score, numbers do help tell the story. So here’s the key one: at Cree River Lodge I caught more giant fish in four days, than in my last four northern trips—added together. And that, my friends, is no fish story.

Find out more about Saskatchewan fishing outfitters by clicking here.

Scott has written national-award-winning stories about chasing gamefish all over North and Central America.